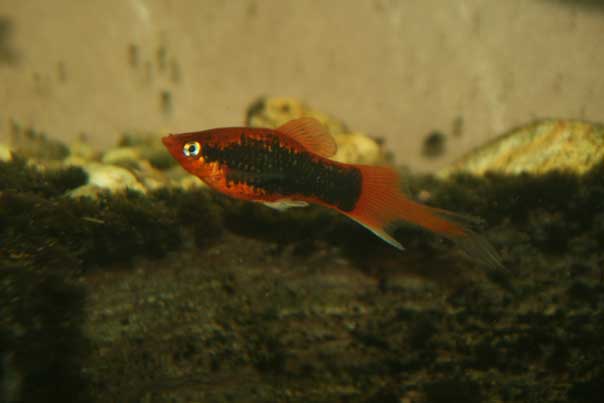 Plumetail is a dominant gene. I originally raised plumetails in the 1970s, but had let them all go. Then at the fish auction at the end of 2004 American Livebearer Association (ALA) convention in Kalamazoo, Michigan two ugly little plumetail platies came up for sale. I wrote about these two fish in Tropical fish Hobbyist (see http://www.tfhmagazine.com/details/articles/the-tail-of-two-platies.htm). I bought the fish at too high of a price simply to get the plumetail gene. As the TFH article describes, I used them to create Redwag Plumetail Platies and Redtail Black Plumetail Variatus.

Since we want all of our platies to sport plumetails because plumetails, hifins, and lyretails are all worth more than normal finned fish, I wanted to transfer the gene to our popular Red Tuxedo Platy. I choose male Redwag Plumetails to mate to Red Tuxedo females since that would make it easier to keep the red coloration than if I used an unrelated color. As a side benefit, besides producing Red Tuxedo Plumetails, we also got Red Mickey Mouse Plumetails. (If anyone is interested in the genetics behind this, contact me and I’ll explain).

This week we finally were able to set up a plumetail only breeding colony of Red Tuxedo Platies. We’ll still produce some non-plumetails since undoubtedly some of our breeders are heterozygous for the plumetail gene (meaning they carry the recessive gene for non-plumetail), but after a few generations that will end and we’ll have a population of true breeding plumeta