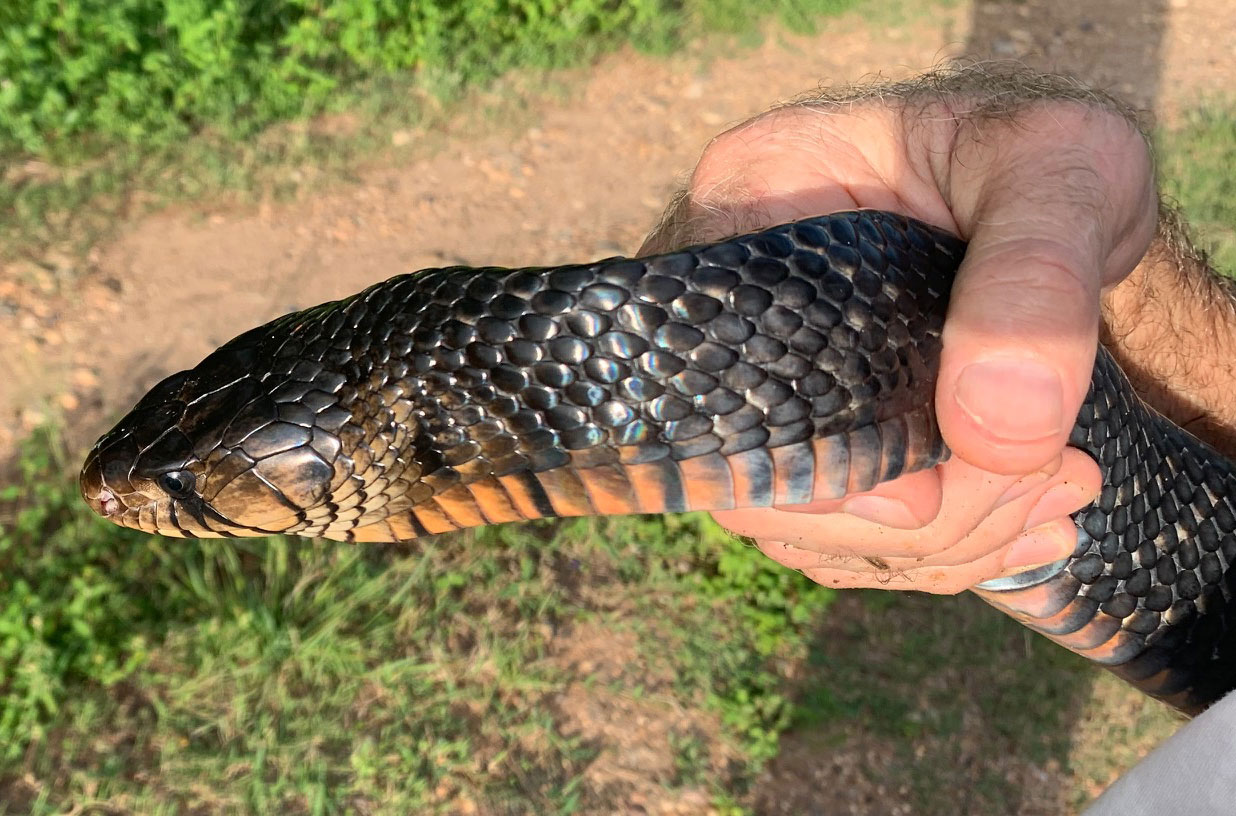 After at least 50 years, I finally once again saw a Texas Indigo Snake (Drymarchon melanurus erebennus) on our farm. But first:

A DISCLAIMER (well…maybe, you’ll have to read more to find out what is it)!

Many online resources say something similar to what https://www.reptilefact.com/texas-indigo-snake.html  says, “Found in Texas and almost everywhere in Mexico, the Texas Indigo Snake is a large size snake that is a member of the colubrid family. They are non-venomous and have been declared as a threatened species by the US state of Texas.” Note the “threatened” status. I, too, thought it was considered threatened by both the State of Texas and the US Government. Apparently, we are all wrong. First, I searched the Texas Parks and Wildlife website and didn’t find the Texas Indigo Snake listed as either threatened or endangered. Here’s a link to the listing, check it yourself:

Then, I went to another Texas Parks & Wildlife page:

Guess what it said?!?! (If you go to the above link, you’ll have to scroll down a bit to see it) “The Texas indigo snake, Drymarchon melanurus erebennus, is a subspecies of the Eastern indigo snake. It is listed as threatened in Texas and cannot be hunted or killed.” (As an aside, below that paragraph are some cool photos of an Indigo eating a Western Diamondback Rattlesnake (Crotalus atrox).) (Another aside: If you are reading this a while from the time that I published it, the text may have changed. As you’ll see later in this blog, the text is wrong on a couple of points and it might have been corrected.)

So, in an abundance of caution I also checked the US Fish & Wildlife Service where, lo and behold, I found the Eastern indigo snake (Drymarchon corais couperi) listed (see https://ecos.fws.gov/ecp0/profile/speciesProfile?spcode=C026).

Something worried me. Did you notice the difference in the names? Our Indigo, apparently Drymarchon melanurus erebennus, was not listed. And did you notice that Texas Parks & Wildlife called our Indigo a subspecies of the Eastern Indigo? Our Indigo, according to the State of Texas, is a subspecies, erebennus, of the species Drymarchon melanurus. The US Fish & Game Wildlife Service places the Eastern Indigo as a subspecies, couperi, of the species Drymarchon corais. I always thought the Eastern and Texas Indigos were subspecies of the same species. Wondering what the deal was, I went to our go-to taxonomic source, the Integrated Taxonomic Information System (https://itis.gov/). When I selected “scientific name” and typed in “Drymarchon”, here’s what I got:

It looks like a real mess! But, for our purposes, note these two lines from the listing above:

So, now I knew the Texas Indigo is a subspecies of the Central American Indigo and not of the Eastern Indigo. But, is it threatened? Faced with conflicting information from Texas Parks & Wildlife, I decided to call them for clarification. When I asked about the status of the Texas Indigo, I was transferred to an extension. No answer, but I did go to voicemail. I left my question. After a few days I got the answer via my voicemail. According to the message, in March of this year (2020), the Texas Indigo was reclassified as “non-commercial” from “threatened.” The message continued, saying that as a non-commercial species the Texas Indigo can be captured for personal use, but cannot be sold. Wanting more clarity, I searched the Texas Parks & Wildlife site for a definition of “non-commercial.” No luck. So back to the phone.

Once again, I went to voicemail and left my question. I was referred via a voicemail answer to my call to a person who was out of the office for a few days, but her message included her email address. I emailed, asking for a clarification concerning “non-commercial” status. After a few days I got a message providing a link to the Texas statute (law) describing this. For those who want to know more, here’s the link:

It turns out the Texas Indigo is not threatened as of March 2020, but as a non-commercial species collecting it for your own personal use requires a permit. Furthermore, the permit does not allow the sale of trade of the snake. The conclusion that the Texas Indigo is not threatened is important to me since I don’t want to be accused of capturing a threatened species. Why? Because here’s what Texas has to say (see https://tpwd.texas.gov/huntwild/wild/wildlife_diversity/nongame/listed-species/species-protection.phtml):

“The ESA protects endangered and threatened species and their habitats by prohibiting the “take” of listed animals and the interstate or international trade in listed plants and animals, including their parts and products, except under federal permit. It is unlawful for a person to take a listed animal without a permit. Take is defined as “to harass, harm, pursue, hunt, shoot, wound, kill, trap, capture, or collect or attempt to engage in any such conduct.” Through regulations, the term “harm” is defined as “an act which actually kills or injures wildlife. Such an act may include significant habitat modification or degradation where it actually kills or injures wildlife by significantly impairing essential behavioral patterns, including breeding, feeding, or sheltering.”

Finally, we get to my DISCLAIMER! While I do not have a permit to collect a Texas Indigo, I merely rescued the pictured snake from our two German Shepherd Dogs, Oso and Maya. They consider snakes to be deadly enemies best quickly dispatched. The dogs cornered the snake against one of our greenhouses. I rescued it before they could inflict any damage. Fortunately, I had time to affect the rescue since the dogs are cautious about any snake species they don’t know. They, eagerly and without pause, attack Texas Rat Snakes (Elaphe obsoleta lindheimeri) and Diamondback Water Snakes (Nerodia rhombifer), both non-venomous; but don’t attack Western Diamondback Rattlesnakes (Crotalus atrox) and our local Copperheads (Agkistrodon contortrix laticinctus), both venomous snakes. When encountering the latter two species, the dogs stay back several feet and make their distinctive “bad snake bark.” Their caution about attacking a snake they didn’t know allowed me to get to it first. Since I was alone with the snake and dogs, I decided to carry the snake to the house where Susie (wife and business manager) could call our son, Carl, to come help secure the dogs while I released the snake.

While Indigos are large, powerful snakes, they are also very docile. On the trip to the house, the snake opened his mouth once, but didn’t try to bite me. He did squirm a bit but quickly relaxed and was calm. At the house Susie called Carl who lives across the road. While waiting for Carl, Susie took some photos. When Carl arrived, he took a few more. The snake didn’t seem much concerned about me, but every time one of the dogs approached him, he puffed up his neck and vibrated his tail. Perhaps wild canids like coyotes are major enemies and the dogs reminded him of them.

Once the dogs were secured, I took the snake back to the greenhouses to release it. When I placed it on the ground, the snake raced off into cover at a surprisingly fast pace (can snakes, which don’t have legs, have a “pace?”).

I’m hopeful the Indigo sticks around. This has been an active rattlesnake year, with eight sighted already and six relocated from work areas to one of our pastures. Twice recently we’d seen a Western Diamondback Rattlesnake (Crotalus atrox) near our greenhouses that we had not been able to catch for relocation. I’m hopeful the Indigo will catch and eat it (more about this later).

Before I get into some Texas Indigo natural history, why had it been at least five decades since I’d seen an Indigo on the farm? Three factors have contributed to Indigos becoming rare in Texas. First, prior to the Endangered Species Act the Indigo was over-collected by hobbyists. It is a large, impressive, and fairly docile snake, making it a favorite of collectors. Second, Indigoes have large home ranges often including increasingly busy roadways. This leads to squished snakes, and I’ve seen large one dead on the road about three miles away. Finally, many of the farms and ranches in the area have been split up for development, placing the snakes too close to people who think the only good snake is a dead snake. Most old-time farmers and ranchers knew Indigoes are beneficial. A common saying was, “If it’s indigo, let it go.” They wouldn’t think of killing an Indigo. Why did they like them? Indigoes are non-venomous. But, more importantly to farmers and ranchers, Indigoes are apparently immune to pit viper venoms, which they relish as food.

As can be seen from the photos below, the Texas Indigo Snake is mainly black with shiny iridescent scales. The belly ranges from gray to almost pink to bluish-gray. They grow large. The one I rescued was at about six feet (1.8 m) long. They grow to length of nine feet (2.75 m), making it the USA’s largest native snake.

Indigoes are mostly diurnal, meaning they are active during the day. They hunt and devour everything small enough to eat. Their diets include small mammals, birds, lizards, frogs, turtles, eggs, and other snakes, including rattlesnakes. (For photos of this go back and read my Disclaimer. There is a link to a site that has some. Maybe next time you won’t skip parts of my blogs, there just might be something interesting buried there.)

Like the other large snake in our area, the Coachwhip (Masticophis flagellum testaceus), they often take shelter in abandoned animal burrows.

Texas Indigoes mate in the fall or winter. In the spring, females lay clutches of about a dozen eggs, which hatch in about three months. The neonates are large, about 25 inches (~0.65 m) in length.

The Texas Indigo snake is found in the range shown by the map below, usually near permanent streams. For their Texas range take a peek at this map from: https://www.reptilefact.com/wp-content/uploads/2017/12/Texas-Indigo-Snake-Range.jpg.

Note that Goliad County (look it up in a mapping program!) is near the northeastern edge of the Texas Indigo’s range.

Since our farm is in the Texas Indigo’s historical range and it was here when I was a child, I had been hoping it would return to the farm. That hope had been encouraged by my sightings of two Indigoes about three miles away and my sister, a mile away, had a resident Indigo for the past three or four years.

The presence of the rescued Indigo might explain the sudden absence of Copperheads in our yard. From seeing dozens every week in previous years, we only have seen four this summer. If you are interested in our Copperheads, here are some blogs about them.

If the Indigo is responsible for the recent dearth of Copperheads, maybe it will also reduce our rattlesnake population a bit. Interestingly, I’ve noticed our gopher (Geomys personatus) population is much reduced. I wonder if the Indigo is contributing to that.

Just to recap: I rescued a Texas Indigo, which is NOT a threatened species under the Endangered Species Act. While the Texas Indigo is considered a non-commercial species requiring a permit to capture, again I rescued the snake and released him as soon as practicable. Finally, I’m pleased to see Indigoes return to our farm.

Postscript: Just a few days ago, I saw another Indigo, a four-footer. The dogs and I were returning from the feedstore and both Oso and Maya were secure in the van. I was opening the gate at the road and saw the young snake about fifty feet (~15 m) away crawling toward me on the lane to our house. It also saw me and took off into the woods. So, maybe we have a sustainable breeding population now.