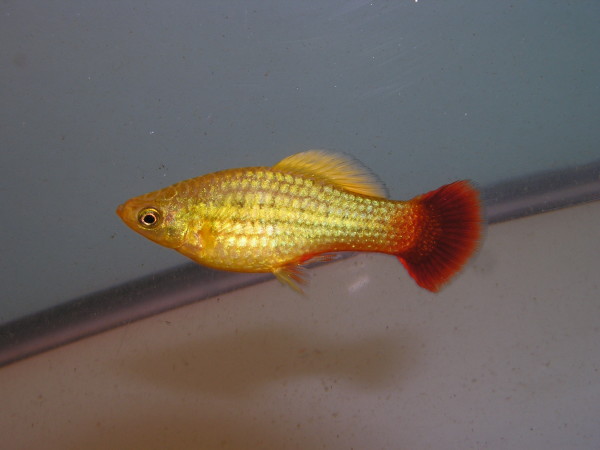 I’ve recently begun blogging about the Variatus-type Platies we raise. For a discussion about the meaning of “Variatus-type,” check out an earlier blog I wrote about our Redtail Blue Variatus. This blog concerns our Sunset Variatus strain, which we developed independently to but is visibly identical to the commercially available Sunset Variatus. Here’s the history of our strain.

In 2003 Hurricane Claudette wiped out much of our rainbowfish breeding stock. We’d primarily raised rainbowfishes while our hatchery was located in Santa Fe, New Mexico and that continued when we moved our hatchery to South Texas. Reviewing changed circumstances including the declining hobby interest in rainbowfishes and the different climate and water chemistry between Santa Fe and Goliad, Texas, we decided to expand the variety of fishes we offered. Livebearers and cichlids seemed like good alternatives to rainbowfishes. So, we ordered both types of fish from Ekkwill and 5-D hatcheries in Florida. One of these was a box lot of Variatus. From those fish, by means of careful color selection we first produced our Redtail Black Variatus. From that original strain we’ve developed several color strains of Variatus. One of these was Sunset Variatus.

Variatus Platies, much like guppies, are highly variable. We spend a lot of time culling off colored fish. One cull that showed up fairly consistently in our Redtail Black Variatus line was a fish without a black tuxedo or black body. In other words, a Sunset Variatus. Male Sunsets have yellow-gold bodies, yellow dorsals, and, often, red caudals. I decided to keep some of these to produce a new (for us) color strain. Why did these fish continue to show up? Simple, the black body of our Redtail Black Variatus results from the dominant gene for tuxedo combined with a number of modifier genes that enhance and spread the black. The tuxedo gene without modifiers causes black spotting along the fish’s lateral line. The modifier genes enlarge those spots merging them into a tuxedo pattern (I have no idea why a black bar through the middle of the body is called “tuxedo,” but it is). By accumulating modifier genes one can produce a fish with a black body. How do you do this? Simply select breeders each generation with the most black.

The ideal Redtail Black Variatus male sports a sold black body, yellow dorsal, red caudal, and yellow face, and this is what we select for. But, some of our original breeders were carrying the recessive allele for non-tuxedo. A fish inheriting two copies of the non-tuxedo allele will not have black on the body regardless of the presence of modifier genes. We maintain breeding colonies large enough (typically six males and 50 females) for recessives such as non-tuxedo to survive in the population despite selection against them. As a result, occasionally a fish would inherit two copies of the recessive and would not have black on the body. That fish would be a cull in our Redtail Black Variatus strain, but would be a perfectly good Sunset Variatus.

By isolating these non-tuxedos and mating them together we easily produced a true breeding line of gold bodied fish. All that remained was picking the best fish as breeders. For males this was a nice yellow dorsal, a red caudal, and a pleasing yellow-gold body. Females tend to be duller in color.

We’ve recently added Hifin and Plumetail to this strain by outcrossing to other platy strains with these two genes. Hifin is a dominant gene that is usually lethal when a fish inherits two copies of it (is homozygous for Hifin). As a result, mating two Hifins typically yields only two-thirds Hifins. Plumetail is likewise a dominant gene but is not a lethal homozygous and it’s possible to yield 100% Plumetails when mating Plumetails together. My goal is to develop a breeding colony of Hifin Plumetail Sunset Variatus. By continual selection for only Plumetail breeders, eventually by chance the recessive non-plumetail allele will be eliminated from the population. Since Hifin is typically a homozygous lethal, it won’t be possible to eliminate the recessive non-Hifin and I’ll have to settle for a yield of two-third Hifin Plumetails and one-third Plumetails. That is, unless my experiments with a possible non-lethal Hifin gene pan out. I’ll blog about that project later.