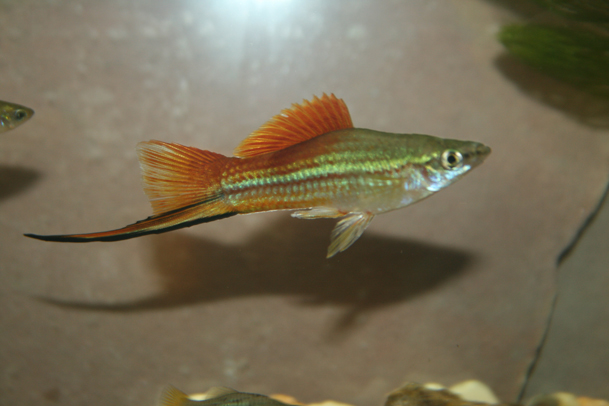 Today, while sorting through our White Mickey Mouse Maculatus Platies to select breeders for our breeding colony, I thought, “Wouldn’t it be nice to have this color pattern on a swordtail?”

No sooner than thought, I set aside eight female platies. After finishing with the platies, I picked a large male Blushing Swordtail from our sale tank of that fish to place with the platy females. I choose this fish because other than a red blush just below the dorsal, it had wild type coloration. I didn’t want to have to deal with a large number of colors genes. I wanted simplicity. I’ll explain.

There are a number of genes involved in color and color pattern in swords and platies. Wag, which requires two genes, one from swords and one from platies. Red, which can be modified in various ways to create brick reds, scarlets, oranges, red tuxedos, etc. I didn’t want to deal with these genes. A good green swordtail from a true breeding strain would have been best. But, the Blushing swords would do.

So, here’s what I expect. The first batch of fry (all due within the next four weeks) will be White Mickey Mouse Maculatus Platies. But, the next batch of fry will probably be sword/platy hybrids. How will I know? They will not be white.

Once I get these fry grown, I’ll mate them together, brother/sister. Among their offspring should be some white fish. At least I hope so. I’m not certain because don’t know white platy genetics. I suspect it is recessive. Partially, because they breed true and it’s easier to develop true-breeding characteristics with recessives. If you don’t understand why, let me know and I’ll explain. If I get whites, I’ll select the most “sword” looking fish to breed together. if I don’t, I’ll breed the most “sword” looking but non-whites together. This’ll mean more than one gene is involved in the white color and it’ll take more generations of inbreeding to get the right combination.

I’ll keep you posted on my progress.