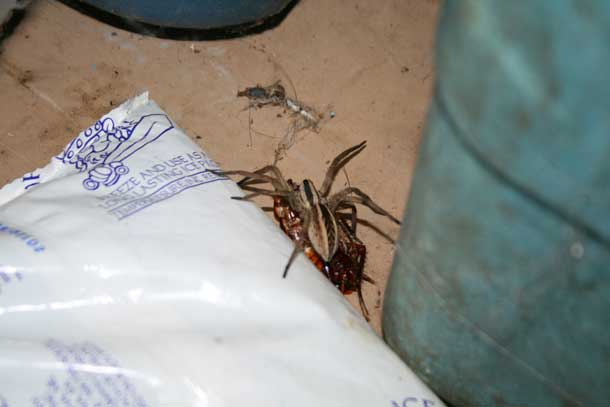 One morning in the warehouse I saw this wolf spider running across the floor with an American cockroach in its jaws. The surroundings in the photo include a cold pack (which someone should have put up…hint, hint, Ashley, a hatchery tech who should have put it away), an empty 5-gallon water jug (people who didn’t grow up on the farm don’t like our well water, so we haul in bottled water for them), the edge of a 45-gallon vat used for holding Gammarus, and various pieces of lint which quickly grow into massive dust-bunnies.

We don’t use insecticides near our greenhouses so we have healthy populations of both prey and predator insects and arachnids. Wolf spiders are common in the greenhouses and the warehouse/shop. They are efficient predators who run down or ambush their prey instead of building webs to trap them. The females are good mothers, carrying their egg cases and, later, the hatched offspring.

There are a number of species of the genus Hogna in Texas. I haven’t definitively identified the species, but suspect its either H. carolinensis or H. helluo. Any spider people out there, please feel free to correct me.